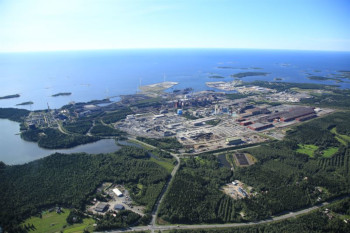 SSAB starts a study in Finland for fossil-free steelmaking. In line with the HYBRIT project, SSAB is taking the next step for a completely fossil-free steel value chain. In partnership with Gasum, Neste and St1, SSAB is initiating an Energy4HYBRIT prefeasibility study supported by Business Finland to investigate the use of fossil-free energy sources, primarily biomaterial side-streams, to replace fossil fuels in certain steelmaking processes, for example rolling processes. The Raahe mill will act as SSAB’s pilot.

The HYBRIT initiative, owned by SSAB, LKAB and Vattenfall, aims to replace the coke used in iron ore-based steelmaking with hydrogen. Ironmaking accounts for around 90% of SSAB’s carbon dioxide emissions. The new process would emit water instead of carbon dioxide. Laboratory tests and a prefeasibility study have shown that the process works and the pilot plant being built in Luleå, Sweden will be completed in 2020. The aim of the initiative is an ambitious one and will potentially reduce Sweden’s carbon dioxide emissions by 10% and Finland’s by 7%.

“The Finnish effort is an important step in our ambition to become fossil-free in all our operations. Together with our partners, we will introduce a completely fossil-free value chain from the mine to the finished steel products. We are aiming to be the first in the world with fossil-free steels to the market already in 2026”, says Martin Lindqvist, CEO and president at SSAB.

“The joint Energy4HYBRIT project now being launched will focus on the remaining 10% of carbon dioxide emissions originating in numerous other steelmaking processes than ironmaking. One of the main aims in the prefeasibility study will be to explore the possibility to use fuels other than fossil fuels in these processes. Regarding biofuels, the project will study the possibilities of collecting, transporting and utilizing felling and other biowaste and sidestream products from the Baltic Sea region,” says Harri Leppänen, Director, Environment and Safety at SSAB.

SSAB Raahe will act as SSAB’s pilot works. The University of Oulu and VTT will study and model all the energy flows at the works. The energy companies involved in the prefeasibility study are looking into the use and availability of alternative energy sources.. The study will be finished before June 2020.