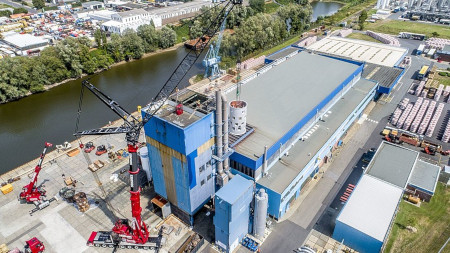 SMS group has replaced a complete copper shaft furnace with the control system at Deutsche Giessdraht in Emmerich (Germany). The modernization was carried out in two steps during the regular summer shutdowns which took three weeks each.

Deutsche Giessdraht GmbH, a company of Aurubis Group Deutschland, was faced with the tasks to not only keep its more than 40-year-old shaft furnace for copper rod production competitive, but also comply with higher environmental, safety and emission requirements.

A great challenge of the modernization project was a limited timeframe since only a summer shutdown period of maximum three weeks is available every year to make sure that customers are otherwise continuously supplied. In a close contact, an unconventional concept was created considering customer-specific requests. The complete conversion work was divided into two construction stages to make it possible that revamping was carried out within scheduled stoppages. Only through close and cooperative partnership of all persons involved the implementation could be realized within the specified time interval on time and completely.

In the first phase of modernization in 2018, control and safety equipment was modernized and preparations were made for the foundation of the new copper furnace. The modern control system is a significant simplification for operators providing at the same time a transparent data display.
Based on the experiences gained during the application of the new control other optimization and customer requests were expressed which were then also implemented during the second construction phase. In addition to that, the burner supply was optimized and renewed. Through the new uniform design of the burner configuration a high flexibility is reached when burners are replaced.

For the second modernization phase extraordinary ideas were translated which could only be realized with excellent cooperation of all persons involved. To reduce the assembly time the bottom furnace segment was already relined locally before it was taken into the building and only then it was installed. Usually, the furnace is first completely mounted and then relined, i.e. the necessary drying time would have prolonged the necessary timeframe significantly.
During the scheduled summer shutdown period in 2019 only three weeks passed between complete cold blowing of the cathode shaft furnace up to furnace reheating. After just four weeks the first 1,000 tons of dg-RheinRod™ were produced. The salable copper wire thus met the ambitious requirements of Deutsche Giessdraht GmbH and its numerous customers.