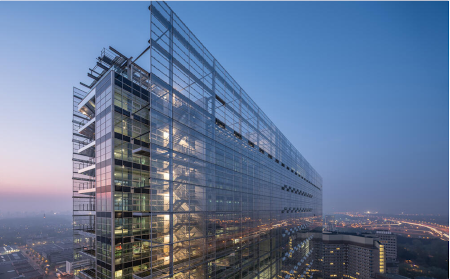 The new European Patent Office (EPO) in the town of Rijswijk in the Netherlands reaches 107 metres into the sky of The Hague. This landmark building with bold, contemporary architecture and a modern, sustainable infrastructure replaces the 1973 tower building that previously housed the EPO. HISTAR® high strength steel sections from ArcelorMittal were selected for the columns and the metal structure.

Time for a change

After several decades of use, the EPO building was showing signs of wear due to ageing and the windy and rainy climate. The decision to construct new EPO offices was the result of a firm resolution to provide staff with a state-of-the-art workplace that would be sustainable and to symbolise the EPO’s commitment to supporting innovation in Europe.

The new EPO is comprised of two buildings, referred to as the New Main and the New Hinge. The New Main is the largest steel structure ever constructed in the Netherlands with 10 000 tonnes of steel. Behind this high-rise building and connected by a corridor is the four-storey New Hinge, which houses an extension of the restaurant, eight meeting rooms, and a new fitness area.

Glass, steel, plants, and colour are prominent features of the new design. Steel was opted for as it allows for rapid and relatively low-noise construction, its light weight offers advantages over concrete, and it offers greater flexibility in space planning.

An architectural design of noble scale

Well-known architects, Jean Nouvel and Diederik Dam, wanted to introduce a flagship of noble scale and proportion with geometric abstraction. The slender shape of this 27-storey, 85 000 metre-square office building allows the light to pass through, inducing a sense of transparency as it appears to float effortlessly as part of the sky. With its double-glazed facade, the 100 000 square metres of glass become its defining characteristic as they take on the colour of the sky through slightly iridescent clear glass.

The entrance materialises as a great steel canopy sloping down into the water. On either side, the flags of 38 EPO members float high over the water and are reflected at different heights in the glass along the entire length of the facade. The lobby is flooded with natural light up to six meters in height and over the whole of its perimeter, while waiting areas and a bar are located at water level. The office floors are open plan, linear, and orthogonal in relation to the sky. The long perspectives of the central corridor open onto empty space - the horizon.

In 2019, the EPO was awarded the international prize for ‘Best Tall Office Building’ by the Council on Tall Buildings and Urban Habitat.

Aside from the need for flexibility and the planned facade transparency, the choice of a steel skeleton frame was also motivated by the desire to reduce construction weight and the need to efficiently erect the 27-storey building on a site with limited space for building material storage and the use of large equipment.

In order to maximise load bearing capacity and limit the structure’s weight, ArcelorMittal’s high strength HISTAR® steels were the chosen solution for some of the European sections that form columns and other structural components. HISTAR® grades combine high strength with excellent toughness at low temperatures and outstanding weldability – ideal for high-rise buildings such as the EPO.

Six main trusses of approximately 52 tonnes each form the backbone of the main supporting structure. Over the bottom five floors, three single, 22-metre-long HD sections were welded together to form columns that allow for optimum load transfer to the foundation.

3300 tonnes of double and triple primary columns of HD 400x1086 in HISTAR® 355 and 700 tonnes of single secondary HD columns in HISTAR® 355 were supplied by the Steligence® Fabrication Centre. These sections were used to form the described columns and trusses of 6 m in height and a length of 18 m.

The secondary structure and stability frames were realised with 3000 tonnes of HISTAR® 355 and HISTAR® 460.

The entire structure is placed on 1250 foundation piles on a concrete foundation. The bases include six steel base plates, of 16 tonnes each, included to distribute the load evenly over the foundation. The large main trusses were brought to the construction site at night by special transport and hoisted into place with a mobile 300-tonne crane.

A model for a sustainable office building

The building's design places a strong focus on sustainability with minimised impact on the environment and healthy, safe, and comfortable indoor conditions for staff and visitors. The EPO stipulated that the energy performance requirements of the new building should be 20% more efficient that those set by the Netherlands as part of its commitment to meeting EU legislation. To ensure such sustainability, criteria from the Netherland's BREEAM-NL and the German BNB methods of environmental assessment were included in the requirements for the building.