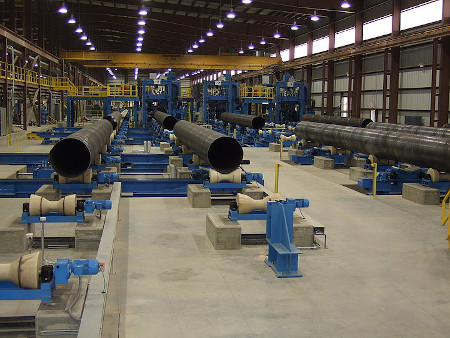 Stupp Corporation has awarded SMS group the contract to extend the spiral pipe mill at its site in Baton Rouge, Louisiana in the United States. The contract consists of two projects: a partial revamp of the spiral pipe machine to increase pipe production capacity, and a new submerged arc re-welding stand to complement the existing three welding stands. The plant’s modifications will go into operation end of 2020.

Stupp purchased a spiral pipe mill from PWS GmbH – now a wholly owned subsidiary of SMS group – back in August 2007. A total of three SMS group orthogonal-type final welding stands were installed at that time. The mill started production in 2009 and manufactures spiral pipes for oil and gas pipelines within the 24 to 60 inch diameter range and a maximum pipe length of up to 24.4 meters. These are produced in a two-stage process: the first stage is where the spiral pipes are formed and continuously tack-welded in the spiral pipe machine. In the second stage, the pipes are finish-welded on separate final welding stands using the submerged arc welding (SAW) technique.

In parallel, the spiral pipe machine will be upgraded with a new de-coiler station that allows for higher strip feeding speeds and is equipped with a programmable braking system. This allows the required strip tension to be maintained between the de-coiler station and flattening device, so that the coil cannot unwind in an uncontrolled manner. The braking system thereby prevents surface damage on the strip surface typically caused when coils unwind violently, particularly with high-strength material grades, which are increasingly specified nowadays for oil and gas line-pipes.

After years of production using the SMS group orthogonal-type stands, Stupp Corporation has selected the helical-drive system, after close consultation with SMS. In addition to boosting welding capacity, the new stand will also be compared with the three existing stands in terms of performance: in the helical-drive system, the pipe is transported by a helical-drive type with sets of driven rollers, which can be pivoted, and not by means of the double cardan rollers as used in the orthogonal-type stands. The angle of the helical-drive rollers can be changed at the touch of a button from the operator station in order to rotate a pipe in place, or, to convey it longitudinally or helically.

As a key benefit, the helical-drive system is that the pipes move more uniformly on the helical drive conveyor, according to the combined experience of SMS engineering and SMS customers already operating that system. This in turn has a direct and positive effect on the quality and uniformity of the weld seam. For Stupp, this means that the welding defect rate can be reduced and that the weld seam geometry is kept as constant as possible.

The highly automated final welding stand is equipped with the latest control and drive systems and components. The automation systems feature drives and sensors that use network technology throughout, thus allowing all machine parameters to be accessed and recorded. Data analytics are available to help monitor the quality of the pipes and supply the machine's production parameters in order to enable the specific optimization of production processes and cycle times, as well as to forecast maintenance intervals for equipment units.

What's more, the new final welding stand can boost production by up to 25 percent, depending on the pipe size. As a result, Stupp can increase its existing annual capacity by 40,000 to 60,000 tons. In addition, the new final welding stand can be employed to compensate for downtime and associated maintenance work or outages in the other existing stands.