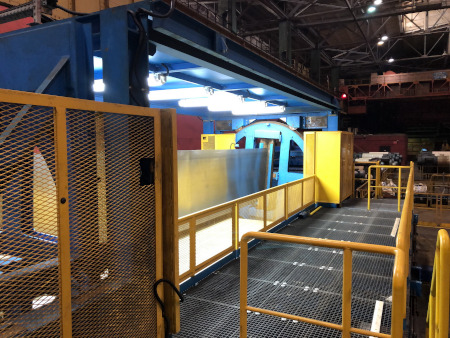 The first strip was successfully rolled on the tandem cold mill TCM “2100” at PAO Severstal in Cherepovets, northwest Russia, after the successful mill modernization performed by SMS group. After SMS group had comprehensively modernized the entry area in 2016, including the rolling stands and the automation system (Phase 1), the recent measures concentrated on the exit area and the stand drives.

For these measures, two project phases were defined. Phase 2 included the supply of a tension reel including drive motor, replacement of the Ward-Leonard converter with an AC converter featuring active energy recovery, an offline strip inspection station of the Rotary Inspect type and two coil cars.

The new installations also required the hydraulic equipment to be adopted in the form of new hydraulic valve stands for the coil cars and the inspection station. Also the X-Pact® automation system was expanded according to the new equipment layout. Decentralized I/O systems were used to enable fast modification of the equipment.

Project phase 3 was initiated and carried out in parallel to phase 2. The main drive motors of mill stands 2 to 4 of the tandem mill including the converters were completely renewed. In addition to the main drive motors, the mechanical drives of the mill stands, including the spur gear-pinion gear units, motor couplings and drive spindles, were also replaced. The scope of supply also included a new, centralized oil circulation lubrication system. The power electrics was upgraded to the state of the art. As a result of the modernization, the rolling speeds and strip tensions have been increased. Maintenance costs are significantly reduced thanks to the new drive equipment.

The X-Pact® master control system, including the HMI (Human Machine Interface), was also adapted to the new mill layout. In order to minimize the effect on the ongoing production at PAO Severstal, SMS group combined the dates for the installation activities of both phases within in one 42-day shutdown. The run-up phase after completion of the measures took only two days. After the successful commissioning, PAO Severstal now has a “completely renewed” and state-of-the-art tandem mill enabling full exploitation of the maximum rollable strip width of 1,850 millimeters. In addition, thanks to the revamp, PAO Severstal is now able to react flexibly to all market requirements.