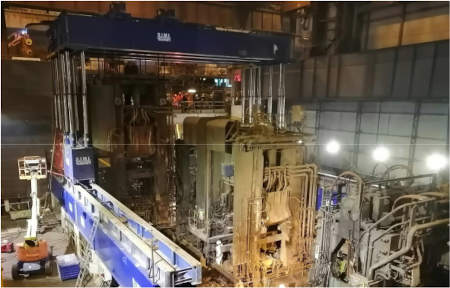 In September, the Arvedi ESP (Endless Strip Production) line at Acciaieria Arvedi in Cremona, Italy was restarted after a major upgrade. The modernization, performed by Primetals Technologies, included changes to the continuous casting machine, resulting in an increase of mass flow, and, consequently production capacity. The upgrade is the first step to raise the overall production capacity of the ESP line to 3 million metric tons per year. The measures undertaken will also improve product quality. All modernization work was carried out during planned shutdowns in December 2019 and August 2020, with the ESP line starting up 3 days ahead of schedule. In the first month of operation after re-starting, production exceeded previous levels.

The first pioneering Arvedi ESP line at Acciaieria Arvedi, Italy has been operating for 10 years. Acciaieria Arvedi has gathered much experience of how to improve quality and increase productivity and charged Primetals Technologies with the design, supply and execution of the upgrade. In this context, the metallurgical length of the line´s caster was elongated to 21.8 meters by adding two caster segments, provisions for an additional segment 13 were also made. This allows an increase of casting thickness to 105 millimeters, resulting in a mass flow of 450 tons per hour which is the highest mass flow for a thin slab casting plant worldwide. The required space for the additional segments was obtained by moving the first high reduction mill stand R1 downstream of the original R3 to becoming the new R3 stand. The flexibility to increase the metallurgical length, as well as the option to later move the rolling stand R1 to the R3 position, including foundations, was already foreseen in the original plant design of 2006.

The EAF of the ESP melt shop also received an upgrade and a ladle size increase. Accordingly, the ladle turret was replaced, with a larger unit, including new software features, etc. Improved automation models will give further support to serve a higher value added products market directly from the ESP line.