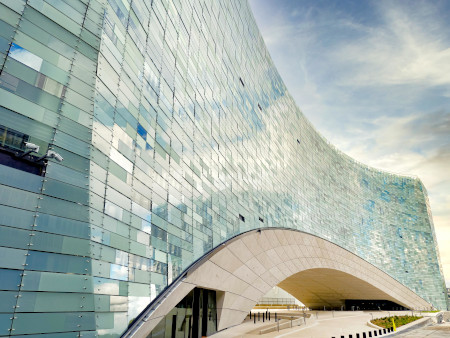 The new headquarters of the French daily newspaper Le Monde officially opens today. The building provides Paris with a new architectural highlight. Steel from Dillinger plays a key “supporting role” in the structure: the steel structure of this extraordinary project near the Paris Austerlitz railway station contains 1,000 tons of Dillinger heavy plate. Both Dillinger and its subsidiary Dillinger France produced the plate used in this new building.

The city’s development plan originally called for construction of two buildings because the site consists of three enormous slabs covering the railway tracks and the middle slab is not suitable for construction. To circumvent these building restrictions, the architects decided to use a bridge-like structure to span the property not suited for construction. The result is a true architectural masterpiece: a steel structure similar to a pedestrian bridge, onto which metal and concrete floors are suspended.

The glass-enclosed bridge in the center of the 7-storey building is 137 meters long and 37 meters high and combines nature with technology, with green spaces as well as LED lights distributed over the entire area, like stars moving in the sky. The façade of the building is covered with a matrix of glass pixels that create various effects – sometimes transparent, sometimes opaque. The roof is equipped with photovoltaic modules and a rainwater collection system.

For the steel framework of this extraordinary project, Dillinger supplied more than 1,000 t of heavy plate in thicknesses from 15 to 140 mm in the grades S355J2+N, S355N, S460M and S460ML. Hereby, Dillinger was once again above standard - although the EN 10025-4 standard in force at the time only defined plate thicknesses of up to 120 mm, our customer relied on the Dillinger quality and used the higher-strength structural steel S460ML above the standard up to a thickness of 140 mm.

The building is not the only structure in Paris that contains a bit of Saarland: Steel from Dillinger has also been used in recent years for the elegant Simone de Beauvoir pedestrian bridge and the spectacular Fondation Louis Vuitton museum.

London’s tallest building was built with steel from Dillinger

London is now home to another reference project made with steel from Dillinger: the Twentytwo skyscraper that was completed this year. At a height of 278 meters, it is now the tallest building in the City of London and, with its 62 floors, it visually dominates the skyline of the banking district. A total of 3,700 tons heavy plates from Dillinger are contained in the steel skeleton of the gigantic building that is also described as "vertical city within the city”.