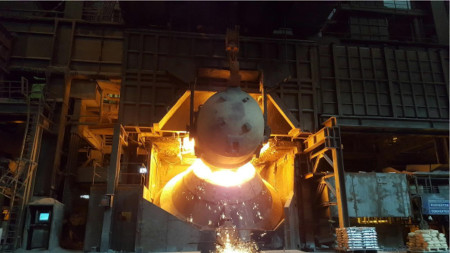 Primetals Technologies replaced the LD (BOF) converter no. 2 at the Smederevo production location of the steel producer HBIS Group Serbia Iron & Steel LLC (HBIS Serbia) which went on stream in the beginning of November. In the meantime, the new converter has passed all the performance tests and received its PAC. The purpose of the project was to optimize the process and increase production capacity. This was achieved by a bundle of measures including increasing the volume of the converter vessel to 0.9 cubic meters per metric ton and installing a bottom-stirring system. The critical external dimensions remained unchanged, so the interfaces to the adjacent equipment could be retained. Nor was it necessary to modify the converter foundations or make structural changes to the converter platforms. The new converter has a tapping weight of 105 metric tons. It is equipped with a maintenance- free Vaicon Link 2.0 suspension system, new tilting drive, new bottom-stirring system, "dart" machine for slag retention, slag-splashing technology, and a new automation system.

Despite the pandemic-related restrictions, delivery of plant components, construction, commissioning and performance test were all completed within the given timeframe. No less than 21 taps were completed within just 24 hours of commissioning. The contractually agreed 100 taps were achieved within six days, so HBIS Serbia has already issued the Provisional Acceptance Certificate (PAC).

Primetals Technologies was responsible for the entire engineering of the new LD converter no. 2 as well as for optimizing the increase in the volume of the vessel. In doing so, the clearances of the supporting bearings had to remain the same to avoid having to modify the foundations. The scope of delivery included the new vessel with removable bottom, the trunnion ring, Vaicon Link 2.0 suspension system, new supporting bearings with housing, a new tilting drive with pneumatic emergency drive, the bottom- stirring system, a "dart" machine for slag retention, and installation of the slag-splashing technology. Primetals Technologies also supplied the electrical equipment and a new Level 1 basic automation system for the new tilting drive and the existing melt shop facilities such as the ferro-alloy system and transfer cars. The order also included the associated consulting services and installation work, which was performed in conjunction with a local Serbian company.

HBIS Serbia produces steel, hot and cold-rolled products, and tinplate in South-East Europe. It has plants in Radinac near Smederevo and in Šabac. The plant in Smederevo produces iron in two blast furnaces, which is then converted into raw steel in a three-furnace converter shop and further processed in a continuous casting complex. For processing the steel, the plant has a hot strip mill, a sheet cold reduction mill as well as annealing and tempering units. The vessel casing and the trunnion ring of converter no. 2 had reached the end of their service lives.