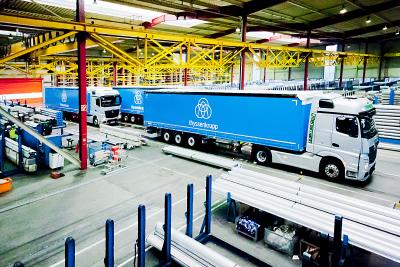 Following successful piloting at its Nuremberg site thyssenkrupp Schulte GmbH, a company of the thyssenkrupp Materials Services business area, is now rolling out the web-based TimeSlot system to its other locations throughout Germany. Implementation is already underway in Frankfurt, Freiburg, Fellbach, Munich, Kassel, Heilbronn, Radebeul, Völklingen and Weingarten, and will follow at other sites later this year. thyssenkrupp Schulte is using the electronic timetables to optimize the management of incoming traffic. The main objective of the time slot management system is to maintain consistent utilization of loading and unloading capacities.

The decision in favor of the TimeSlot system from Freiburg-based software company Cargoclix was made after an extensive comparison of providers. "TimeSlot is widely used and has a good reputation. But above all we were impressed by how easy and intuitive it is to implement and use," says Frank Lüddecke, Head of Process Excellence at thyssenkrupp Schulte. These are key factors for a successful company-wide rollout, he added.

With more than 100,000 products available from stock, 600,000 m2 of storage and warehouse space and 400 processing machines, thyssenkrupp Schulte is one of the leading service partners for materials distribution and processing. The company offers a broad range of flat products, sections and tubes, stocked at over 40 sites throughout Germany. Every day they supply more than 70,000 customers in industry, trade and construction. Following a safety briefing incoming trucks are allocated an unloading point. They are then routed directly to the right area of the warehouse for unloading by crane or forklift.

Time slots are already being allocated to more than 1,500 trucks per month. With the exception of regularly scheduled deliveries, all shipping companies must book a time slot. Slots can be booked from 21 days in advance up to 4 p.m. on the day before the desired delivery date, and at 50 cents the slot price is at the lower end of the scale.

To guarantee a fully digitized process and further automate the receipt of goods, the next planned step is to link TimeSlot to the ERP system.

No thoughts on “thyssenkrupp Schulte rolls out Cargoclix TimeSlot System”