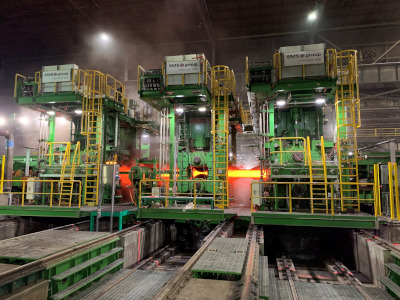 SMS group receives FAC for the revamp of heavy beam mill No. 2 at Nucor-Yamato

Nucor-Yamato Steel Company (NYS), based in Blytheville, Arkansas, USA, has granted SMS group the Final Acceptance Certificate (FAC) for the successful modernization of the heavy beam mill No. 2, on which wide-flange beams and I-beams are produced. The goal of the revamp was to strengthen further NYS's leading market position in the structural steel sector by expanding the product range, increasing production and processing new highstrength steel grades.

The modernization particularly focused on replacing the existing conventional UR-E and UF stand arrangement by a compact threestand tandem reversing mill of the type CCS® (Compact Cartridge Stand) 1500. The new stands are characterized by higher rolling forces, hydraulic adjustment under load and a fully automatic quick program change function. Furthermore, in the CCS® mill stands, both the old existing rolls and bearings can be used as well as new rolls with larger bearing diameters. This reduces roll costs and represents a major advantage of the CCS® stand design. NYS is thus able to manufacture heavier products and expand its product portfolio. The scope of supply also includes roll shop equipment and a new automation system for real-time process control.

In addition, a hydraulic adjustment system of the bottom roll for the breakdown stand was supplied to increase the flexibility in the rolling process. It allows the bottom roll to be adjusted from pass to pass, is used for roll force measurement as well as for overload protection and as roll unjamming device. Furthermore, the scope of supply includes reinforced axial keeper plates for the breakdown stand that allow clearance-free axial clamping of the chocks.

The revamp concept had been elaborated in detail already before the signing of the contract. In the SMS group test center in Mönchengladbach, Germany, the software and hardware to be supplied were tested and pre-optimized by means of a Plug & Work integration test. Thus, the commissioning effort on the site could be reduced and a rapid start-up curve of the production could be implemented. "With only 16 days, the main shutdown for the revamp including the demolition of the old stands was tightly scheduled, and this tight schedule was strictly adhered to. The SMS team was there to support us throughout the entire execution phase of the project," says Jim Shelton, Roll Mill Manager at Nucor-Yamato Steel. "We are confident that this revamp will give us a decisive advantage in the market.”

Despite the restrictions caused by the COVID-19 pandemic, all this was achieved on time and with a quick start-up of the plant thanks to the successful cooperation between NYS and SMS group.

NYS also operates a medium section mill at the same location, which was modernized by SMS already in 2014. The two rolling mills have an annual total capacity of 2.4 million tons of finished products.