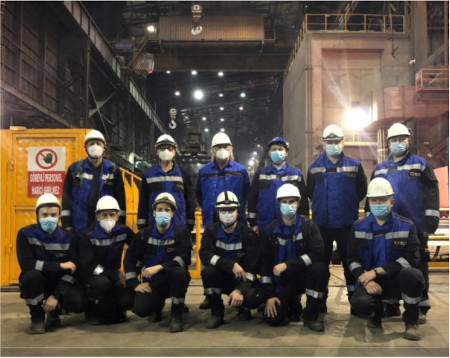 In December 2020, the Turkish steel producer Colakoglu Metalurji A.S. (Çolakoğlu) issued the final acceptance certificate (FAC) to Primetals Technologies for the first part of the modernization of the two-strand slab caster at the Dilovası plant near Istanbul. The modernization order covered the Level 1 and Level 2 systems, the Mold Expert system, and the segment controller. The line was also extended.
Primetals Technologies carried out commissioning both locally and by means of remote support. The modernization of the existing systems has improved product quality and enabled the production of additional steel grades. Furthermore, extending the strands increased casting speed and therefore raised the production rate.

In 2020, Çolakoğlu modernized the existing Level 1 and Level 2 systems, the Mold Expert system, and the segment controller at the Dilovası plant near Istanbul. The modernization order was performed during extension of the line, replacing Çolakoğlu's existing systems with state-of-the-art technology. The modernization of the existing systems means that additional steel grades can now be produced. Commissioning of the second part of the order is scheduled for summer 2021.

The first part of the modernization at the Dilovası plant near Istanbul, run by the Turkish steel producer Çolakoğlu, has been successfully completed. The systems were successfully modernized during a nine-day shutdown of the line. Project execution greatly benefited from the presence of employees from Primetals Technologies Austria and Poland on site as well as from the support of Primetals Technologies experts at the location in Linz in Austria, who, due to the current situation, were connected via the Internet using collaboration tools. A further major factor in the success of the project was the good cooperation with Çolakoğlu, the steel producer. In recent months, Primetals Technologies has successfully completed a large number of orders by means of remote support, using video conferencing tools, smart glasses, and augmented reality solutions.

Çolakoğlu runs an electric steel plant in Dilovası. The plant's main products are slabs for subsequent processing in a hot rolling mill and billets used for producing rebars and rock bolts. The Çolakoğlu plant is one of the world's largest steelworks. It was supplied by Primetals Technologies and has been in operation for several years now. This most recent modernization project represents a further milestone in the successful business relations between Çolakoğlu and Primetals Technologies.