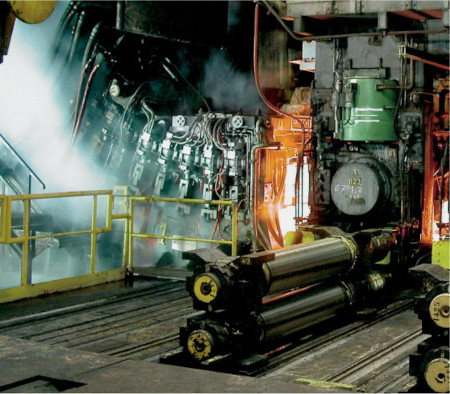 Primetals Technologies has obtained the final acceptance certificate (FAC) for a new type of continuous casting control on an Arvedi ESP casting and rolling line. The "LevCon Bender Anti-Bulging" process patented by Primetals Technologies was commissioned for the first time anywhere in the world. The mould level in the continuous caster is stabilized by means of a controlled oscillation in the distance between opposite rollers in the bending section. This new type of process reduces the "bulging" effect of the strand on the mould level at high speeds much more effectively than by simply controlling the mould level via the steel flow into the mould. For the first time ever, it is now possible to compensate mould level fluctuations with higher frequencies.

The bulging effect of a strand is greater at high casting speeds, and higher frequencies occur. This makes such control particularly interesting for Arvedi ESP lines, which produces hot strip in a combined, continuous and uninterrupted casting and rolling process. The casting speed can reach more than six metres per minute and is therefore much higher than with "conventional” continuous casters, where it is often below two metres per minute. The new process has also been successfully deployed at low casting speeds.
LevCon Bender Anti-Bulging is a registered trademark of Primetals Technologies in a number of countries.

No thoughts on “World premiere: First commissioning of new type of mould level control for continuous casters by Primetals Technologies”