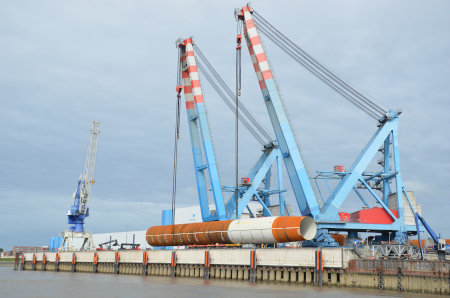 Dillinger is rigorously pursuing its strategic path toward achieving the climate targets set in Europe. With its innovative products, the Saarland-based steel company is contributing in important ways to the sustainable generation of renewable energies. To advance the development strategy in this market and strengthen the company’s position, the Dillinger Supervisory Board has approved the Board of Management’s EUR 56.5-million investment proposal to expand production of super heavy plate at Dillinger (Dillingen) as well as production of wind tower foundations, known as monopiles, at the Dillinger subsidiary Steelwind Nordenham.

Offshore wind farms are one of the pillars of the Europe-wide energy transition: The EU is now planning to expand electricity generation from offshore wind to 300 gigawatts by 2050. Germany plans to expand to 40 gigawatts by 2040. A global expansion to around 160 gigawatts is expected by 2030. Around 80 wind farms have already been built in Europe on steel foundations from Dillinger. Steelwind Nordenham is an established manufacturer of advanced monopiles in the offshore segment.

Dr. Karl-Ulrich Köhler, Chairman of the Board of Management and Chief Technology Officer of Dillinger explains: “Dillinger and Steelwind Nordenham are contributing with their products in important ways toward achieving the targeted climate goals in Europe and worldwide. It is essential now to maintain this lead for a successful energy transition.”

The growing demand for energy from wind power is reflected in larger and heavier offshore foundation structures – with diameters of more than 10 meters and weighing over 2,400 tons – to support more efficient turbines. These dimensions require the use of especially heavy plates with individual weights of more than 35 tons. These plates enable monopiles to be produced with fewer welds and thus boost productivity during manufacture.

Dillinger is already a leader in the production of these high-tech heavy plates, but customer demand is far exceeding current capacities: by processing 600-millimeterthick slabs from the CC6 continuous caster, heavy plates with a unit weight of up to 42 tons can be rolled. To develop this competitive edge and further exploit the possibilities of the world’s largest continuous casting plant in Dillingen, pusher furnace 2 in Dillinger’s rolling mill is now being renovated and reinforced in order to bring the 600-millimeter-thick slabs up to the required temperatures for plate rolling. The investments in pusher furnace 2 will significantly increase capacity for the production of heavy plate. This will allow the monopile design to be optimized, which will provide significant efficiency benefits for Dillinger’s customers.

The investments at Steelwind Nordenham will also considerably increase production capacities and productivity: By expanding the storage areas and optimizing the shell ring construction in order to produce a larger number of monopile segments at a higher unit weight, the company is preparing for the growing demand for ever larger and heavier monopiles in XXL format and for the increased logistical requirements of customers.

“Steelwind Nordenham has stood since the very beginning for excellent quality, superior service and continuous technical innovation in the manufacture and development of ever larger offshore monopiles. We are now consistently and continuously pursuing this path and further expanding our range of services for this forward-looking market,” Köhler said, summarizing the measures.

Dillinger and its subsidiary Steelwind Nordenham are thus creating the conditions to continue offering their partners the best possible high-tech plates and XXL monopiles for highly advanced applications in offshore wind power, even under constantly growing demands. Both companies are thus making a major contribution toward tapping the enormous potential of offshore wind energy, without which it will be impossible to achieve the climate targets and the energy transition.

No thoughts on “Dillinger continues investing in wind power”