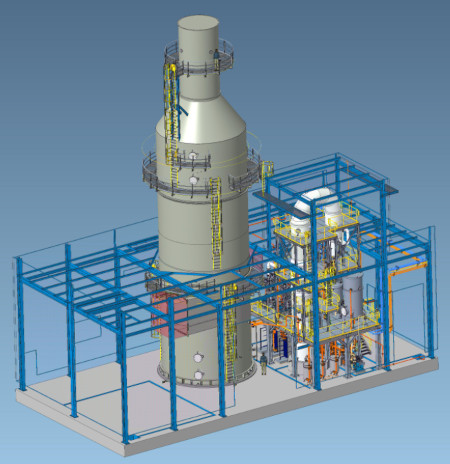 Greek aluminum manufacturer ElvalHalcor S.A. has equipped its cold rolling production plant in Oinofyta, close to the Greek capital of Athens, with an Airwash™ system for exhaust air cleaning from SMS group. In autumn 2022, Elval granted SMS group the final acceptance certificate, marking the successful completion of the project. With this investment, ElvalHalcor has taken another important step towards establishing an even more sustainable aluminum production and improving environmental protection.

A special feature and also a certain challenge for the actual delivery of the Airwash™ system to ElvalHalcor was its size, since the system is not only designed for a single cold rolling mill, but is able to also cover the exhaust air volume of the two existing rolling mills as well as any potential future cold rolling capacities. Furthermore, being located on top of the ceiling of the roll shop floor makes it a "first of its kind".

For SMS, it is the largest Airwash™ system so far with an exhaust air capacity of up to 450,000 cubic meters per hour. In theory, a maximum rolling oil quantity of 425 kilogram per hour can be recovered and re-introduced into the rolling process.

It is not the first time that the Greek premium aluminum producer has relied on SMS as a supplier of important key components for its production facilities. Since the late 1990s, ElvalHalcor has been operating an aluminum cold rolling mill from SMS. Furthermore, SMS supplied a four-stand hot strip mill to ElvalHalcor, which started operation in May 2020.

ElvalHalcor is very satisfied with the new Airwash™ system from SMS, its performance and the overall SMS project management throughout the sales and order execution phase. The customer particularly complimented the engineering work and the resulting fitting accuracy of the components, taking into account all interfaces to the surrounding subsections, which enabled smooth and efficient installation under ElvalHalcor's responsibility.