Laser beam welding in a vacuum (LaVa-welding) is a new and highly innovative process. Compared to conventional laser beam welding, it is characterized by an increase in process stability [1] with a simultaneous increase in quality (comparable to electron beam welds [2]) and weld penetration depth [3]. Conversely, this also means that a required penetration depth can be achieved with significantly reduced energy input by up to 60 % [4], Figure 1. 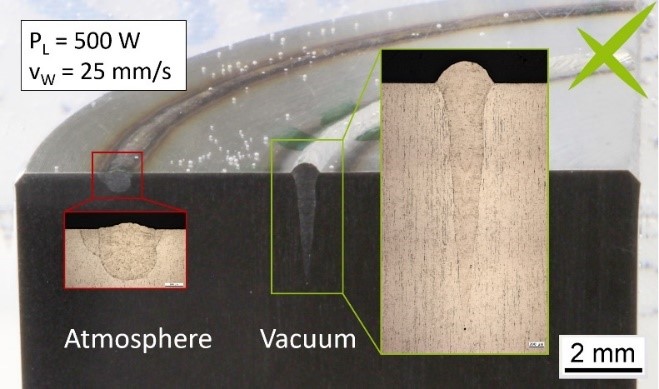 The reasons for the numerous advantages of the LaVa-process can be found in various physical effects:

Both effects lead to the fact that the laser beams energy can be used to increase penetration depth [8]. The described effects increase the stability of the capillary [9]. Even at high powers, where strong spattering often occurs during welding at ambient pressure, LaVa-welding is characterized by highest stability [10]. This further leads to the fact that the vapor emission from the capillary is much more uniform than in the case of atmospheric welding. As a result, the weld surface forms much more uniformly in vacuum [11]. 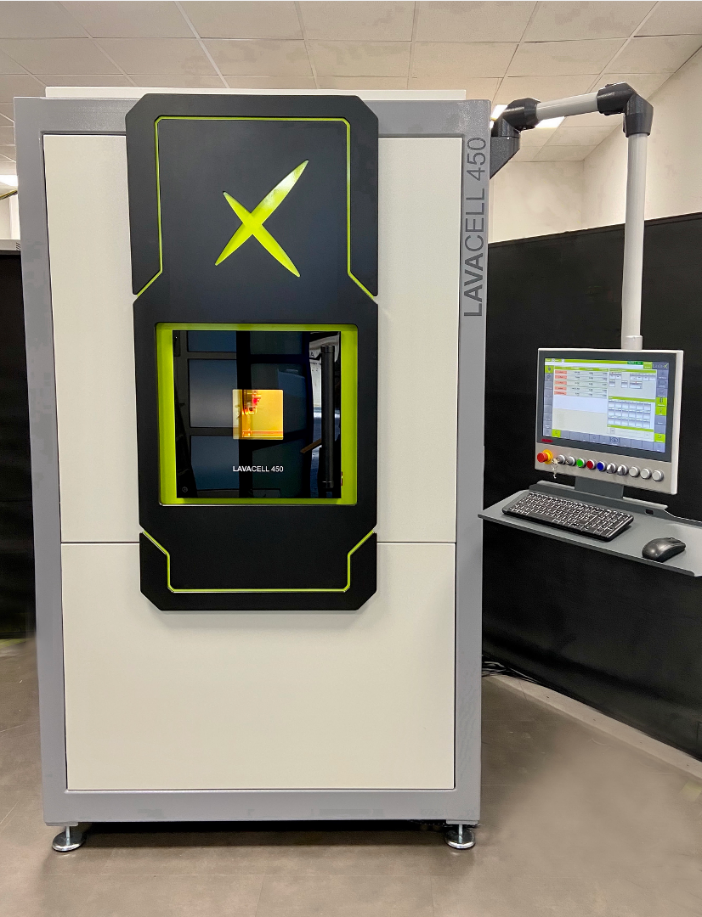 Furthermore, the tendency of pore formation is significantly reduced by the vacuum, since there is a change in the capillary shape and molten pool currents [12]. Behind the capillary an upward flow is formed, therefore gas pores sheared off from the capillary can easily outgas from the melt pool [13]. This effect has even been demonstrated in LaVa-welding of aluminum die casting alloys, which are considered unsuitable [14], and LPB-F fabricated components [15].

While electron beam welding is considered unsuitable for mass production due to the vacuum required, laser beam welding in vacuum has the advantage that the process can be carried out in a rough vacuum of about 100 – 102 mbar [16]. Accordingly, the evacuation times for stationary, chamber-based processes are in the range of approx. 5 – 30 s, depending on the volume flow of the vacuum system and the chamber size.

The LaVaCELL450 (Figure 2), the standard machine of LaVa-X, is equipped with a 2 kW single-mode fiber laser and a scanner optics. In steel, penetration depth of more than 5 mm can be easily achieved with this power. The scan field will be 200 x 200 mm² in the upcoming system generation. The LaVaCELL 450 has a modular design and is always adapted to the customer's requirements in terms of optics, laser and vacuum technology, and degree of automation.

LaVa-welding of foils and membranes

Laser beam welding in a vacuum has the advantage over conventional laser beam welding that the energy required for welding can be reduced by up to 60 %. This enables virtually distortion-free welds, which is of great advantage especially when processing foils and membranes in a thickness range of 25 – 100 µm. Figure 3 shows the weld seam surface (left and center) as well as a cross-section of two 75 µm thick stainless-steel foils that were welded in a lap joint. A laser power of PL = 120 W at a welding speed of vw = 700 mm/s was used for this weld.

In the helium leak test, the weld achieves a leak rate of 1.2 x 10-7 mbar*l/s and can thus be described as hermetically sealed. Due to the high welding speed, the process is suitable for example for the production of bipolar plates for the manufacturing of fuel cells. 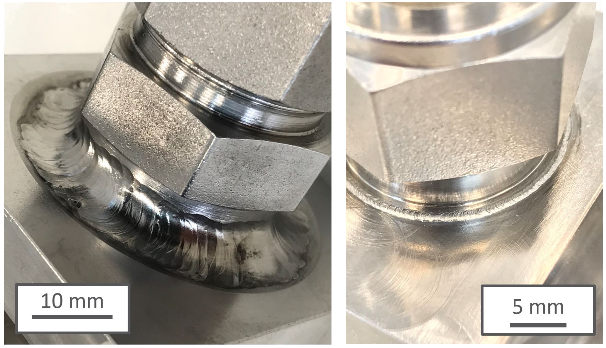 A large field of application in the sensor industry is the manufacture of pressure sensors. In the manufacturing process of housings for pressure sensors, Swagelok weld-in sockets are often used, for example, to integrate the required connections. According to the current state of the art, the sockets are usually welded in using the TIG process, Figure 4 left. To achieve a penetration depth of 3 mm, voltage and current values of 11 V and 200 A are usually used, which corresponds to a power output of 2,2 kW. Assuming an efficiency of about 60 %, this means that a power of about 1,3 kW is introduced into the workpiece. Due to the high energy input, distortion often occurs. In the cross-section (Fig. 5 left), the distortion of the TIG weld, which visibly reduces the cross-section of the weld-in socket, can be clearly seen.

With LaVa-welding, much slimmer weld seams can be produced, Figure 3 right. For example, penetration depths of 3 mm can already be achieved with a power of < 500 W (Figure 4 right), which corresponds to a reduction in energy input of about 60 %. Furthermore, the welding speed for TIG welding is about 8,3 mm/s, while the required penetration depth for LaVa-welding is achieved at 20 mm/s. Accordingly, welding time can be reduced by 58 %.

The energy input can be reduced by 84 % when using LaVa-welding compared to the conventional TIG process. This makes the process particularly suitable when virtually distortion-free final contour machining is required on sensors. The low heat input also means that any electronics inside of the sensor housing are not damaged. Gaps of more than a tenth of a millimetre can be easily bridged with adapted beam oscillation.

In addition to the possibility of achieving the same welding result with significantly less laser beam power compared to welding in the atmosphere, the LaVa-process also offers the possibility of generating higher penetration depths.

Since large penetration depths usually also involve large component volumes, it is not practical to process these components in oversized vacuum chambers. For this reason, LaVa-X has developed laser beam welding with mobile vacuum as an industrial process.

The mobile vacuum system (Figure 6 left) generates the vacuum only locally around the welding area, the system moves alongside the welding process. 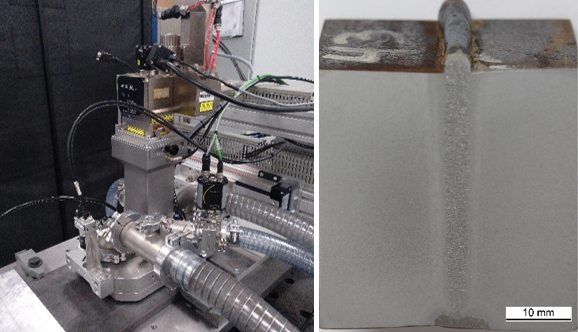 Recent developments show, that introducing a filler wire feeding unit to the mobile vacuum system, gaps of 1 mm width can be bridged. Furthermore, edge misalignments of up to 2 mm can be overcome. Thus, the process is suitable for many thick plate applications and is predestined for large scale productions such as manufacturing of foundation structures for offshore wind farms.

The spectrum that can be processed with the LaVa-process thus extends from a few micrometres to 100 mm with a power range of 120 W – 12 kW. With a further reduction or increase in power, these limits can be easily extended.

Thus, the application areas extend from fuel cells to the production of offshore foundation structures.