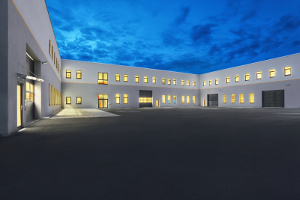 Since the laser micro machining specialist GFH has grown continuously at an average rate of 50% over the last few years, a decision was made in the spring of 2016 to increase production capacities and expand at the Deggendorf location. The existing company premises with a size of 1,100 m2 were expanded to 2,600 m2 in order to increase both the office space and the size of the production facility, and also to expand the portfolio. Sustainability and energy-efficient building services engineering were emphasised by the company both in the conceptual design and during realisation. The ground-breaking ceremony for the addition was held in November of 2016. Construction proceeded according to plan so that the ground floor and upper storey were ready for occupation in the early autumn of 2017. The new building, which was constructed with financial support from the Bavarian Ministry of Economic Affairs and the European Regional Development Fund (ERDF), is being inaugurated as part of the company’s 20-year anniversary in June of 2018 with about 800 invited guests.

“In light of increasing demand for our high-precision laser micro-processing equipment and the fact that our existing space capacities were entirely exhausted, we decided in the spring of 2016 to build an addition,” reports Dipl.-Ing. Anton Pauli, CEO of GFH GmbH. Aside from the additional production facilities and administrative premises that were needed, optimising the flow of materials was an important reason in favour of new construction for the Großwalding operation. “With the expansion and the restructuring of our intralogistics that became possible as a result, we are establishing the conditions required for considerably improving our production efficiency and also for future growth.” Planning the 1,500 m2 addition began at the start of 2016 and the ground-breaking ceremony took place just a few months later on November 16. The entire construction phase proceeded according to plan, not least because GFH GmbH handled a large part of construction management itself. A major challenge in this project was to use the available space to the best possible advantage while coordinating all planning and construction phases with each other in terms of time and space, so that production downtime was entirely avoided. The ground floor was ready for occupation quickly, by August of 2017, and moving into the upper storey followed in October of 2017 so that orderly operations could be resumed. “We stayed on schedule and on budget thanks to visionary planning and good collaboration between all the companies involved,” Pauli reports.

The addition’s upper storey is home among other things to precision assembly of the opto-mechanical assemblies, a department that was outsourced externally prior to the expansion due to a lack of space and has now been brought back into the company. Special attention was paid to establishing conditions similar to a clean room in this facility, for example in regards to air purity as well as temperature control. “We had corresponding air conditioning installed for that reason, as well as antistatic floors with a synthetic resin coating,” Pauli explains. “This will allow us to respond to new specifications and directives more quickly in the assembly of opto-mechanics as well as precision manufacturing going forward. The department can also be classified as a clean room with little effort.” A special feature of the optical tables that are set up there is their honeycomb core, which ensures active vibration compensation. This is an essential prerequisite for fitting the opto-mechanics – such as GFH’s special trepanning optics – with the correct optics components and adjusting them with micrometre accuracy.

“In order to perform mechanical precision manufacturing for key components in-house, setting up a corresponding department over the coming months is also planned,” Pauli says. “Another fully air-conditioned area is available for this purpose.” Temperature constancy of +/-1K with temperature stratification of 1K/m is essential in order to guarantee the precision of a few micrometres required for the production steps in this department as well as optimum quality. An air-conditioning system with a special air source heat pump from the manufacturer Panasonic was installed for this purpose. It works with the innovative three-conductor technology and a predecessor version was already installed in the existing building. “This technology distinguishes itself with very high energy efficiency. We have the option of networking the systems in the two building sections and using them as redundant backup systems for each other. With this air-conditioning system, we are now able to use waste heat from our machines via the cooling water, thereby maintaining the required temperatures in the entire building with minimal additional energy consumption,” Pauli explains. The building shell itself was also designed for the capacity of the air/heat pump. Upgraded insulation was installed to minimise heat losses through the exterior walls. All the interior lighting in the building is also automated and controlled via presence and motion detectors. The lighting technology automatically adapts the light intensity of the LED lamps to the daylight conditions so that the brightness in all rooms is always kept constant. The construction project was supported by the Bavarian Ministry of Economic Affairs and the European Regional Development Fund.

“We are now able to produce up to 50 laser micro-processing systems per year thanks to the addition, corresponding to a 100% increase,” Pauli says in conclusion. “What’s more, we can now increase our own value creation through new in-house production, and take component manufacturing as a service to another level.” The building will be ceremonially inaugurated with about 800 invited guests in June of 2018.