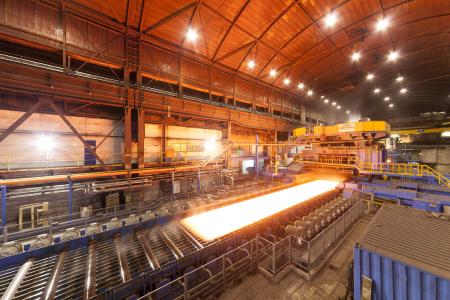 NLMK DanSteel A/S, Denmark, has placed an order with SMS group (www.sms-group.com) for the large-scale expansion and modernization of its heavy-plate mill in Frederiksvaerk. NLMK DanSteel is implementing these measures to expand its product range further in terms of both grades and sizes.

SMS group's scope of supply for the 4.2-m heavy-plate mill includes a new plate cooling system and related water treatment equipment, the installation of a new thick-plate cooling bed, an updated leveling model for the hot-plate leveler, and a revamp of the existing coldplate leveler. SMS group will also supply all the electrical and automation systems for the equipment, and integrate new functions into the existing automation system. The mechanical and electrical equipment will also be installed by SMS group.

In 2012, SMS group supplied, among other things, a new heavy-plate stand and a hot-plate leveler to NLMK DanSteel. "We had very positive experience at that time, with respect to both plant technology and implementation of the partly highly complex modifications," explains Allan Thomasen, Technical Manager at NLMK DanSteel.

"And that was one of the reasons why we again selected SMS group for the next step."

The new plate cooling system is to be designed as a laminar cooling system, which is capable of cooling plates with a thickness of between 10 and 260 millimeters. This will allow NLMK DanSteel to produce high-strength plate for line pipes, shipbuilding and offshore wind parks. NLMK DanSteel can also use the cooling system between the various rolling phases for the thermomechanical rolling and manufacture of heavy plate. The X-Pact® cooling model offers up to three cooling phases for each plate. The option of intermediate cooling reduces holding times between the rolling phases and allows for an increase in throughput.

For the plate cooling system SMS group is also supplying a new water treatment system, in which the cooling water is filtered, cooled and fed back into the process in a closed circuit.

A new cooling bed for thick plate is to be installed downstream of the laminar cooling system and existing hot plate leveler. The cooling bed will be used for plates weighing 40 tons and up to 260 millimeters thick, though it is designed to handle plate weights of up to 62 tons in future. The plate is delivered to the cooling bed automatically. At the same time, the X-Pact® electrical and automation system calculates the cooling times for plate removal as a function of the plate temperatures and dimensions.

As far as leveling the high-strength plate is concerned, SMS group is adapting the leveling model used by the hot-plate leveler to suit the extended product range.

The existing cold-plate leveler will also undergo a comprehensive revamp. In addition to the mechanical adjustment system, it will also be fitted with a hydraulic main adjustment system, ensuring the roll gap can be perfectly adjusted and controlled under load. The existing drive unit is to be replaced by a new individual roll drive. What's more, SMS group is to install a new automation system with leveling model and user interface (HMI).

In order to plan the revamp, SMS group performed a 3D laser survey in advance. Based on this, suitable installation strategies and optimized erection schedules were developed to reduce shutdown times to a minimum, especially as the installation space around the cooling system and cold-plate leveler is extremely limited.

The revamp of the plant will take place in several stages, beginning September 2018 with the modernization of the cold-plate leveler. This shutdown will be used to carry out preparatory work in the area of the mill stand and cooling system, as well as for the heavy-plate cooling bed. Equipment units will then be pre-assembled and wired on site while production is ongoing, in order that they can be installed and commissioned during brief shutdown periods.