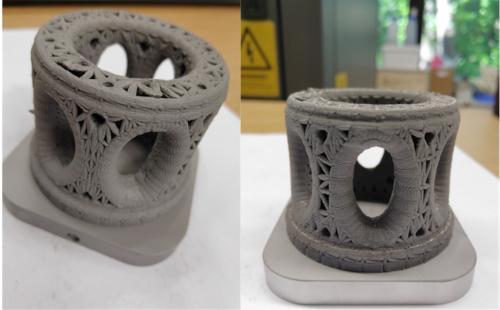 Tungsten alloys (WNiFe / WNiCu) are used because of their corrosion resistance against molten metal and high thermal conductivity for chill-mould casting processing of aluminium. Yet, also in tool manufacture and for shielding from alpha and gamma radiation, the heavy metal with its density comparable to gold is indispensable. However, at around 3,400°C, tungsten has the highest melting point of all chemical elements and is therefore very difficult to work with, as well as due to its Mohs hardness of 7.5. As a result, components with more complex shapes, such as curves or conical bores, often have to be switched to hot-work tool steel, which is easier to form. In order to enable the use of tungsten for those more demanding geometries and thus to increase the efficiency and longevity of the components, Bayerische Metallwerke GmbH, which belongs to the Traunstein-based Gesellschaft für Wolfram Industrie mbH, has developed a new manufacturing process for the tungsten alloys WNiFe and WNiCu and patented it in early 2021. This is characterised by the fact that the multi-phase mixed crystal alloy is obtained in a powder form that is suitable as a starting material for 3D printing and coating processes.

“Due to its resistance to corrosion and erosion from molten metals as well as its excellent thermal conductivity, tungsten is the material of choice in the field of cast aluminium,” says Nabil Gdoura, research and development engineer at Bayerische Metallwerke GmbH. “The very high density of 19.25 g/cm3 in its pure form also makes it a good alternative to the harmful lead, which is still used for radiation shielding in medicine, for example.” In the case of casting moulds, also known as chill-moulds, used in aluminium processing, the aim is often to have long but at the same time very thin and sometimes conically shaped cooling channels of less than 1 mm in diameter in order to ensure the most uniform and rapid heat dissipation possible. Otherwise, the material quality of the end product can be adversely affected by the formation of cracks. Such precise and sometimes curved shapes are impossible to model from the hard heavy metal, whose extremely high melting point is between 3,387 and 3,422 °C, using conventional machining or forming processing techniques. Therefore, for these complex components for the purposes mentioned, it has so far been necessary to switch to hot-work steel, which can be brought into almost any desired shape with the help of 3D printing techniques.

After completing the two-year development phase, Bayerische Metallwerke applied for a patent for their new manufacturing process for a tungsten alloy product and its further use at the beginning of 2020, which was finally granted in January of this year. “The special feature of our tungsten-nickel-iron alloy is that we obtain it in the form of a pre-alloyed powder,” explains Dr.-Ing. Hany Gobran, research and development manager at Bayerische Metallwerke and inventor of manufacturing technology. “This is suitable as a starting product for 3D printing and coating processes.” In the absence of an alternative, only a mixed powder has so far been used to make tungsten usable for components with complex geometries. The main disadvantage of such mixtures, however, results from the different melting points of tungsten (around 3,400 °C) and of nickel and iron, both of which change their physical state at around 1,500 °C. As a result, a large part of the two added substances evaporates in an uncontrolled manner during the melting process in the further processing process. This is because the boiling points of nickel and iron are already around 2,700 °C and 3,000 °C respectively. Thanks to the pre-alloying in the process developed by Gobran, on the other hand, all three elements are combined as a multiphase material in each individual powder particle, so that their composition and distribution in the end product can be precisely controlled and no loss of the binder metals has to be accepted.

According to the common standardised variants, the new alloy can be produced with 80 to 98.5 % (weight) tungsten, 0.1 to 15 % (weight) nickel and 0.1 to 10 % (weight) iron and/or copper. This achieves a density of the end product of 17 to 18.8 g/cm3, which is desirable for applications in the aluminium industry, tool manufacture and for alpha and gamma radiation shielding. “The higher the proportion of tungsten in the end product, the more resistant it is to molten aluminium and the better its thermal conductivity,” explains Gobran. “If, on the other hand, good ductility and mechanical machinability play a greater role, the proportion of tungsten in the alloy can also be reduced accordingly. The composition can therefore always be adapted to the specific application and the respective complexity of the shape.” During the comminution process as part of the manufacturing process, the flow behaviour and the grain size of the powder between 10 and 200 µm can also be determined. In this way, the alloy is individually prepared for the desired type of further processing – such as plasma coating processes or additive manufacturing.

A new manufacturing process enables materials to be upcycled

If, for example, the hot-work steel previously used for thin and conical cooling channels in cast aluminium chill-moulds is replaced by the tungsten alloy developed by Gobran, the application benefits not only from the heavy metal’s resistance to corrosion and erosion. Compared to steel, tungsten also has the advantage of much higher thermal conductivity, so that the wear on the chill-moulds can be massively reduced. Due to its higher density, the alloy product is also an alternative to poisonous lead, which is used not only for radiation shielding, but also as a stabiliser – for example in the tool industry. “Another special feature of our alloy is that we can make the powder from scraps or chips,” adds Gdoura. “This is a big step forward from both an economic and environmental perspective, as it allows us to recycle and upcycle waste products from conventional processes.” 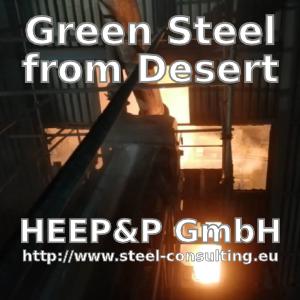