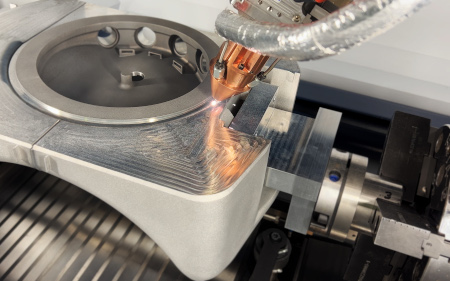 With its wide range of manufacturing technologies, toolcraft AG, based in Middle Franconia in Bavaria, Germany, can constantly tap into new industries. The company has already been working for the defence and security sector for some time. Its most recent project was for Rheinmetall AG and demonstrates the array of possibilities offered by additive manufacturing at toolcraft.

The TSWA is an unmanned weapon station mounted on the rear section of the German army’s Puma infantry fighting vehicle. It consists of an armoured controllable and scalable close-range protection system with highly effective lethal and non-lethal weapons, which hugely increases the vehicle’s resilience not just during urban and stabilisation operations, but in all other areas of deployment. The TSWA has a mount, launcher and an optical targeting system.

The non-lethal weapons (max. 18 consisting of CS gas or stun grenades) can be deployed in a 360° radius around the vehicle, while the lethal weapons (max. 18 grenades with a bore diameter of 40 mm and two different velocities) can be deployed in a 180° radius to the rear and over a limited range to the sides. The system is operated by soldiers in the rear fighting compartment using a control and display unit. The optical targeting system features a high-resolution video camera, a thermal imaging device and a laser range finder. The TSWA can be operated independently of the weapons on board. The weapon system is expected to become available for adaptation to the Puma infantry fighting vehicle following completion of the verification process in 2023. The TSWA was officially unveiled to the public during the celebrations held to mark the 50th anniversary of the Marder infantry fighting vehicle at the Munster Armoured Corps Training Centre on 21 October 2021.

Rheinmetall AG commissioned toolcraft to manufacture components for the TSWA’s launcher. The components include the structural support used to hold all the other parts and the gate used to load and unload the launcher and prevent the ammunition from being removed without permission. The structural support also protects the electronics in a waterproof compartment. Rheinmetall AG chose the innovative additive manufacturing method as it meets the following criteria:

Use of the entire additive manufacturing process chain

Before beginning production, toolcraft prepared the manufacturing data for the additive powder process in aluminium using a laser. The semi-finished products for the structural support and gate were then additively manufactured using a blasting process, before undergoing heat treatment in a vacuum furnace to ensure they had the specified material characteristics. The individual components were joined in the laser metal deposition (LMD) machine by means of laser welding with the addition of powder. And finally, they were finish-machined to ensure they had the required tolerances. The way in which each component is segmented into sub-components which can be additively manufactured individually was taken into account by Rheinmetall during the design phase. toolcraft used a range of quality assurance measures for the entire manufacturing process and the finished assembly, ensuring that the requirements of the DIN 2303 manufacturer certification for the production of defence-related products by means of laser-additive manufacturing and the LMD process were met at all times. The company even produced a special copper nozzle for the LMD process on one of its in-house powder bed systems, using a green laser.

Rheinmetall plans to commission toolcraft with series production of the launcher. “The defence and security sector has strict component manufacturing requirements. We are highly confident that our additive manufacturing process chain is capable of fulfilling all of these requirements,” says Christoph Hauck, Chief Technology Officer and Chief Sales Officer at toolcraft.

No thoughts on “Additively manufactured components for the German armed forces”