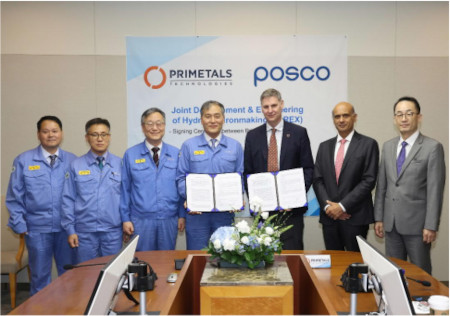 On July 26th, Primetals Technologies and South Korean leading steel producer POSCO signed a Memorandum of Understanding (MOU) to develop a demonstration plant for hydrogen-based hot metal production in South Korea. Startup of the plant is scheduled for early 2027.

“For the development of eco-friendly hydrogen-based hot metal production, collaboration across all sectors such as raw materials, engineering, and hydrogen is essential. Thanks to the collaboration between POSCO and Primetals Technologies, we will make use of leading technological knowledge during development and implementation,” said Dr. Kisoo Kim, Head of Low Carbon Process R&D at POSCO.

With the HyREX technology, POSCO will produce direct reduced iron (DRI) by using hydrogen as reducing gas. The produced DRI will afterwards be melted in an electric smelting furnace (Smelter). The HyREX solution is directly using sinter fines and is, in that way, avoiding any agglomeration steps – like sintering or pelletizing – in advance. Therefore, it is highly cost competitive.

POSCO is on a mission to achieve carbon neutrality by 2050, and on that journey HyREX will be of great importance. POSCO aims to continue evaluating the commercial feasibility of hydrogen-based hot metal production until 2030. Two important steps during this phase are to develop and construct the HyREX demonstration plant. POSCO’s long-term goal is to gradually replace its current blast furnaces with HyREX plants.